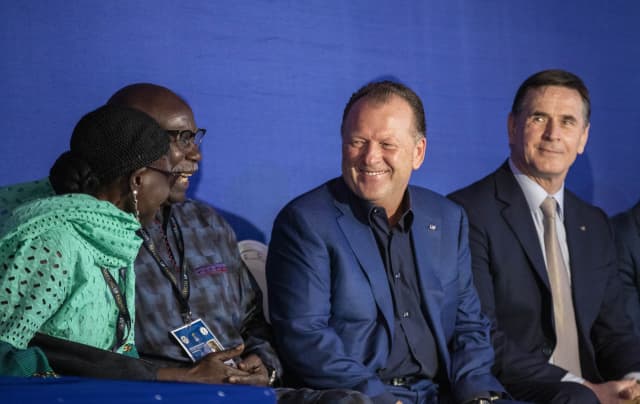 IJF President Marius Vizer was present on the final day of competition of the Veterans World Championships, which saw generations of passionate judoka compete for several days, some for the honor of winning a medal, many others just for the happiness of sharing incredible moments with their judo friends.

Throughout the day, President Vizer had the opportunity to meet hundreds of judoka, who also came with their families in Marrakech and who were particularly happy to share their passion of the sport with the President of the organization.

Nearly 1,200 competitors from 51 countries took part in the 11th edition of the event organized by the Veterans' Commission led by Denis Weisser of Germany, together with the Royal Moroccan Judo Federation led by Chafik Elkettani.

Marius Vizer declared: “The 11th edition of the Veteran World Championships in Marrakech, Morocco, was a great success, thanks to the commitment of all organizers. The Royal Moroccan Judo Federation, who staged a Grand Prix in Marrakech in March and has already organized several top events including the Open World Championships, Marrakech 2017, has shown their capacity and work ethic when it comes to hosting elite judo competitions and we are delighted with the outcome of the Veteran Worlds.

Veteran Judo is key area within our sport and we value the immense contribution of all judoka who fall under this sector and aim to continue offering more resources and opportunities to support the development of judoka in these age categories.

The Veteran Worlds will be closed followed by the Junior Worlds here in Morocco, who represents the future of our sport. We hope that you will embrace this special time in Morocco and in Africa. I congratulate all the participants and I wish good luck to all who will compete in the upcoming days.“

The magic of judo is that you can practice it from the youngest age to no age. Hundreds competitors have proved over the weekend that as long as the pleasure of practicing is there, everything is possible and that the judo family welcomes all its members anytime to make a better world prosper.