Joana Ramos: Focus on the Way

Share
Only three months ago Joana Ramos (POR), European silver medallist in 2011, European bronze medallist in 2017 at the age of 35 and winner among others of the Tyumen Grand Slam in 2015 and 13 medals on the world circuit, was still competing at the Olympic Games in Tokyo. If she has just hung up her World Judo Tour judogi, she has not strayed far from the tatami; quite the contrary, since she is now starting a career as a coach. She was present at the World Veterans Championships in Lisbon and she was happy to answer our questions about her new life. 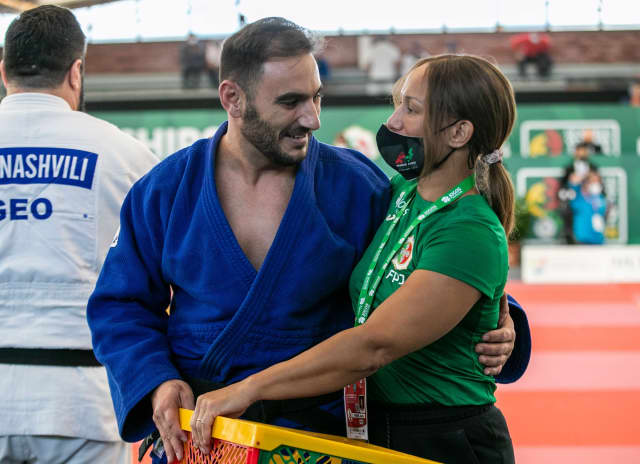 IJF: It's your first experience at an international event, as a coach. How does it feel to be on the chair now and to win your first medal as a coach, as you did on day one of the Veterans World Championships?

Joanna Ramos: "For me it's really rewarding to be fighting for Portuguese Judo in another perspective, continuing to contribute to the improvement of every team we have.

IJF: Was it your will to pass from the tatami as an athlete to the chair as a coach?

Joana: You know the fire is not yet extinguished, but I couldn't do it any more at that level, so we have to say stop one day. I chose to finish in Tokyo in 2020 and I got an extra year, so lucky me. I was really fortunate with that. Then when I said to the Portuguese Judo Federation that I wanted to stop, the second after, they told me, ‘no you can not stop helping our team, we need you and we want you. Do you want to work with us?’ Of course I had to say yes because I had the opportunity to still fight along with my friends and coworkers but now I'm focussing on them much more than before.

IJF: So what was your feeling to win your first international medal here in Lisbon on the occasion of a world championship?

Joana: It's really good, it's amazing. It's another kind of feeling. I am really proud of the people I'm coaching. For me it was almost like it was me but it's their time to shine and I'm just enjoying watching and helping as much I can.

IJF: This is a special competition, with the veterans and later the kata specialists. These athletes have the possibility to win a world medal again, finally. Did you get any feedback from them about the competition?

Joana: It's incredible to see how happy they are. It is really astonishing. They almost look like children sometimes, like cadets because it's so honest and so pure. I'm really lucky to experience this, to be involved in this. This is a special competition because nobody here is doing it to win anything other than friendship and fun, enjoying the moment and giving their best. Fortunately some of them will get medals. They are fighting because they love judo. You see the atmosphere. There is a lot of respect and spirit.

IJF: How do you want to transform your experience as a top athlete for so many years into competences as a coach?

Joana: I think from a technical point of view, I can help the competitors a lot on the tatami, during training sessions. Here in competition it's more about reading the matches and working with them on the tactical level. I have a vision because three months ago I was stil competing at the Olympics. I never really stop watching and doing judo. I know the sport and that is my advantage.

IJF: Now as a coach, you will continue to go to the tatami and practise? Do you think it's important?

Joana: It's important for my heart; I can not live without doing randori. If I don't do that, I get sad. It's much more for my mental health. I need that. I can not stop training. Of course it’s not as intense as before but I still want to improve my technical level, my gripping, because I need to have the feelings; I need that for my mind.

IJF: Maybe it's a little bit early to ask you this but what are your goals and dreams as a coach?

Joana: Well, the same as those of an athlete: to fight for Portuguese Judo, to win podia places with Portuguese athletes and to do our best as a team.

IJF: Let's go back a little in time and talk about your judo background. You were one of the oldest competitors on the World Judo Tour. You finished your career at the age of 39. You were qualified for four Olympic Games and you participated in three of them. Tell us a little bit about your story.

Joana: First we had a coach who had a lot of dreams for us in the female team. He was Antonio Matias. He told us when we were really young, 'you are Olympic material girls! One day, you are going to qualify for the top of the podium.’ I was thinking that he was crazy. We were so young and yes Portugal was improving a lot but his dreams were so high. It's such a long distance but he had the goals and made us focus on a daily basis on our work on the tatami. Every day we would do the most we could and we were trying to improve. He gave us routines, made us think as athletes and also he was one of the most feminist people I ever met. He always taught us to fight for who we are, for our rights and he helped us to value ourselves and our work. That was a really good base. He gave us a grounding. He didn't only help us to get on the podium, he made us successful women inside and outside of the sport.

From then on, I always tried to reach my potential. What I didn't know is what exactly that potential was but I had much more than that and that's where I also learned by myself. That's why I never quit before it was time to quit. I would tell myself: believe, work hard, things will happen. And things did happen. I did qualify for the Olympics at 22. I didn't go but I kept on working, developing my judo, developing myself as an athlete and as a person. At 30, I went to London, then Rio and more recently Tokyo. I didn't win but I did overcome every aspect of me.

IJF: What would be your message to young athletes starting their career now or maybe to those who would like to quit because they didn't reach their goals yet?

Joana: Don't focus too much on the results but focus on improving yourself. From every competition every defeat teaches you something. Use it to improve and use the experience in judo for your daily life. If you are not good at something, train it. If you're not good at school, study more. Try to figure out the best method to gain results at school. Study more and in different ways. Get a team and ask for help. When things are hard, you are not weak if you ask for help, you are wise.

IJF: We know that you also teach judo to children. How is it?

Joana: I love to give classes. The goal is not to win. I have a lot of fun with them. It's also a discovery for me because I really have to be creative. By telling a story, I can teach how to fall. For me it's a challenge, a really good challenge. It’s really important for them. I know that I mark their lives. It needs to be a good experience. I teach them skills for life including social skills, to always share and always take care of each other. We are not against each other, we are developing together.

Joana Ramos was a top athlete and there is no doubt, considering the way she analyses her career that she will soon become a top coach as well, the kind of coach who shows you the way to success.